I remember when we used the Lifebuoy brand of bath soap in the 1960s. That was the era of Breck  and Herbalessence shampoos and aerosol deodorant (Arrid or Right Guard) in our household.  Funny how certain brands fade over time. And consumers move on to the next big thing or "must have," which is whatever the ad copy convinces us we must have.

From the Duke Digital Archive, a wondrous selection of Lifebuoy ads through the years. Each ad reflects the concerns and fears of  its time, or addresses a different group of people: parents, society girls, working women. Click pictures for larger image. 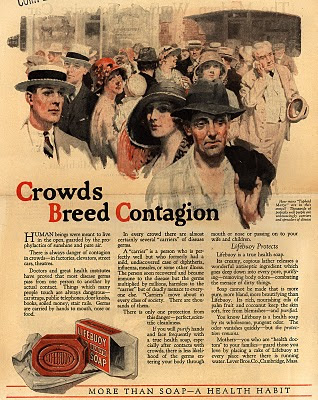 "How many Typhoid Marys are in this crowd?" asks the picture caption. Typhoid Mary infected 53 people between 1900 and 1915; three died. Her story is not urban myth but based in fact, and was still fresh in the minds of people reading this magazine in 1923. 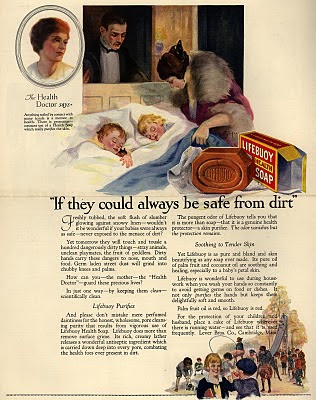 Another 1923 ad: Here Lifebuoy's special oil is touted to protect children, and reference to its pungent odor is defended as proof of its effectiveness. The red color is because it's made of palm fruit oil, which is red. 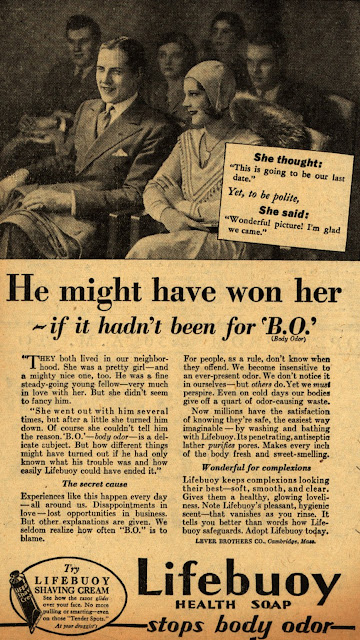 1931: Strange Interlude! The play by Eugene O'Neill was a 1928 hit. Actors expressed their real thoughts as asides to the audience. Could an ad man have been inspired? Why not. It skillfully plants the seed of doubt in the consumer who will do anything not to be the clueless guy with B.O. Interesting photo/illustration -- photo touched up with charcoal, perhaps? Tabloids were notorious for touching up photos to make them more lurid.

1935: Love the way this ad sets up the consumer for enormous insecurity. We all think it's the other person that smells--but hey, maybe it's me! Better get that Lifebuoy soap. 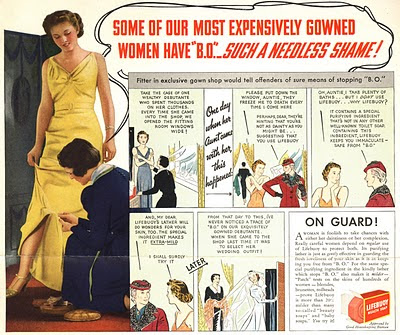 1937: What do you know, even debutantes suffer from B.O. Debs were big celebrities back then, when society pages covered their every move.
Posted by Linda at 3:11 PM 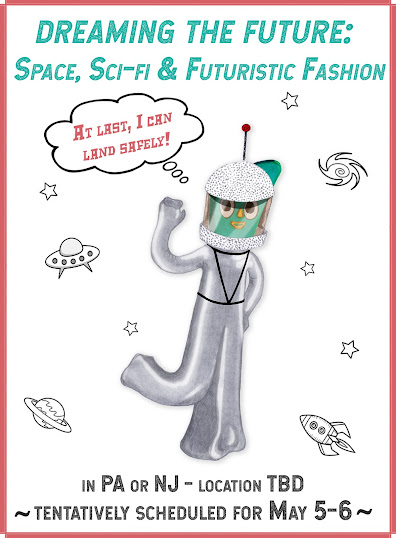